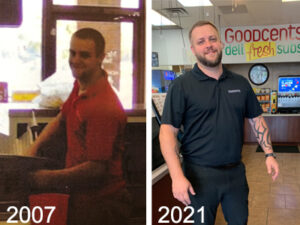 A longtime store manager at Goodcents in St. Peters, Missouri, has purchased the franchise location from the retiring owner.

Ian Darnell has worked at the restaurant at 4101 Mexico Road since 2007, when he heard about a job opening from a friend of the owner, Dennis Dallas. “I interviewed with Dennis, and it just seemed like a great fit,” Darnell said. “I’ve been here ever since.”

Darnell took over ownership of the franchise location June 30. He said he expected a seamless transition that included continuing to provide great service to the restaurant’s customers, many of whom he knows by name, and promoting from within to fill his position as manager. He plans a few updates but says he sees no reason to make sweeping changes.

Promoted to shift leader within a month and store manager three months later, Darnell and Dallas worked closely together for 14 years, and Darnell acknowledged he was dreading Dallas’s retirement.

“I always told Dennis I would retire when he did because I wasn’t looking forward to having a new owner,” Darnell said. “And he finally said, ‘Why don’t you buy it? It would be great for you and your family.’”

Darnell said he thought about it and decided his friend was right. “It was an amazing opportunity, so I jumped on it,” he said. “I’m all in now.”

A resident of St. Peters, Darnell has two children who he would like to take over the business when he retires one day.

Farrellynn Wolf, CEO of Goodcents, said the company is thrilled to keep the location “in the family.”

“Goodcents is like a big family, and we are happy that Ian decided to take the leap to franchise ownership. We look forward to celebrating many more successful years under his leadership at that location, growing his business and serving the St. Peters community,” Wolf said.